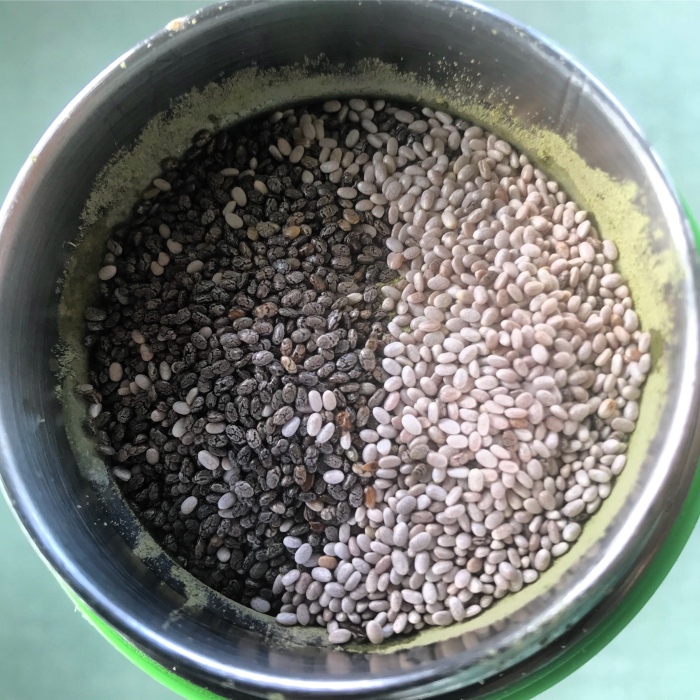 Amongst other things, I add these black and white Chia seeds into my bottle every morning.

I like to call them Ying Yang Chia Seeds!

In Chinese philosophy, yin yang describes how seemingly opposite or contrary forces may actually be complementary, interconnected, and interdependent in the natural world, and how they may give rise to each other as they interrelate to one another. (Wikipedia)

Chia seeds (salvia hispanica) were originally grown in Mexico, the seeds were highly valued for their medicinal properties and nutritional value. In fact, they were even used as currency.

The chia seed is nutrient-dense and packs a punch of energy-boosting power. Aztec warriors ate chia seeds to give them high energy and endurance. They said just one spoonful of chia could sustain them for 24 hours. Chia means “strength” in the Mayan language, and chia seeds were known as “runners’ food” because runners and warriors would use them as fuel while running long distances or during battle.

Not only that, but recent research has found that the chia seeds benefits are even greater than we realized. Chia seeds benefits include promoting healthy skin, reducing signs of aging, supporting the heart and digestive system, building stronger bones and muscles, and more. They’ve even been linked to helping reverse diabetes.

They are best soaked in ample water 30 mins to 2 hours before consuming to make their nutrients more bioavailable for our bodies to absorb.

This “sprouting” process releases the “enzyme inhibitors” that are used to protect the seed and also increases digestibility.

I conveniently add Chia into my diet through my beverages. But you can always add them in salads, yogurt or even smoothies!