This morning as I was about to leave the church after mass, I noticed two burly men holding up a ladder. As soon as they noticed me, they shouted:

“You there! Are you afraid of heights?”

It turns out they needed someone lightweight like me to climb it and help them take out a lightbulb that had fused.

I just happened to be in the right place, at the right time. 🙂

I recognized them as 2 of the most active members of St. Joseph’s Church. In fact, Father Losefo had just asked us to sing a birthday song for one of them, Peni, after the mass. When we were done, Peni looked at me and said:

“What are you doing? Let’s have a coffee!”

Since I’m was free, and it was his birthday, of course I agreed.

As Peni and I walked to the car, I asked him for the name of the other person.

Immediately, he lowered his voice:

“That’s Mata’u. He’s like our Chief. The head of our Samoan community.”

Ahh. Something clicked in my head then about this guy. I’ve had a few other interactions with him in the past and he always struck me as a wise old man who was very knowledgeable, respectful and considerate to all around him.

In fact, he had once told me his story about how he was diagnosed with type-2 diabetes 15-years ago and “cured” himself through diet and exercise. In fact, I think he was way over 100kg back then and currently about 80kg. To achieve this, he had cut out all refined carbohydrates, sugars and starchy foods and committed to walking 2-3 hours everyday!

When we arrived at Mata’u’s house, my mouth fell open in shock! 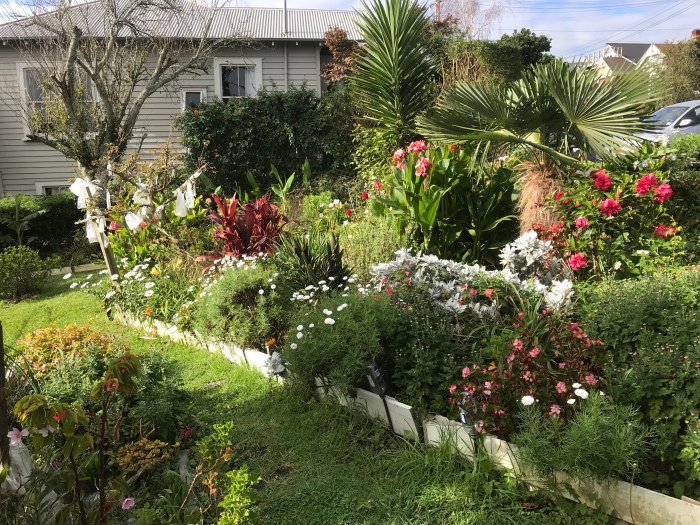 Every day, on my way to and from school, I would jog past this very house and many times I would stop just to admire the beautiful garden outside the house. I would be snapping pictures of the flowers that caught my eye and wondering who it was that had such green fingers and took such great care of the place. 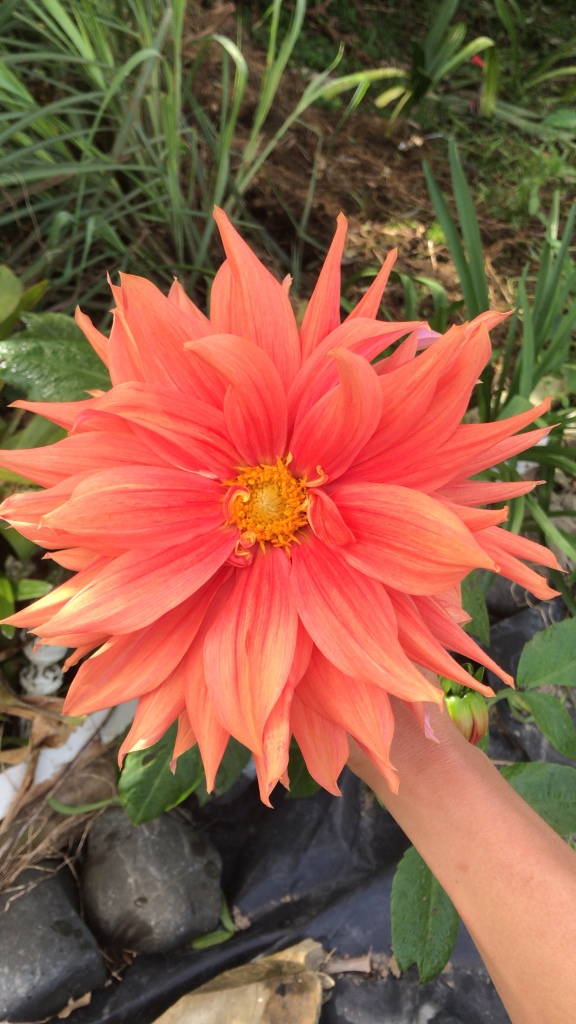 Today, for the first time ever, I took a walk into the garden and had a good look at the flowers. It truly feels like that place is blessed! Almost every plant was blooming and you could almost feel the happiness exuberating from the plants!

There was even a few impressive banana trees! 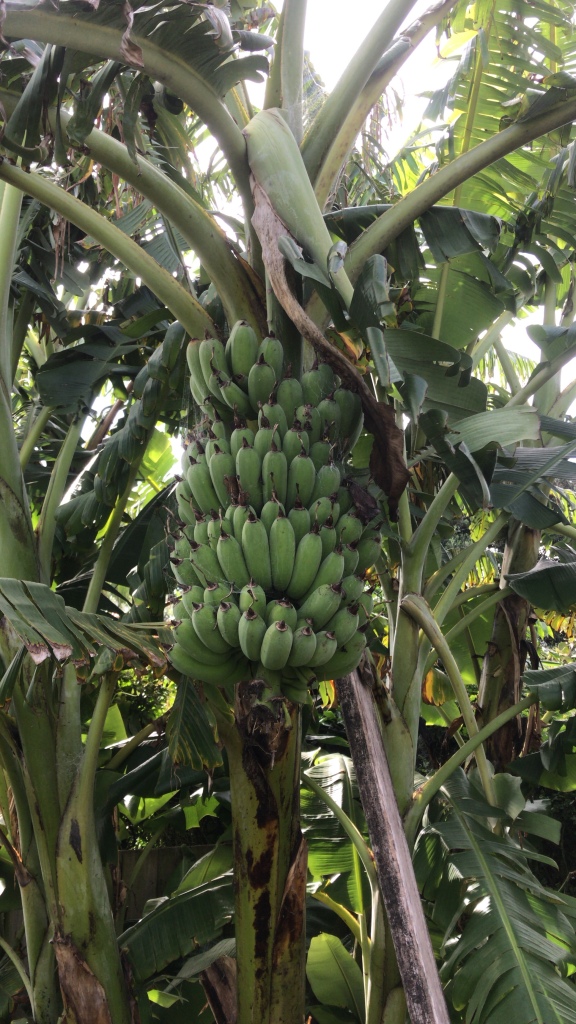 Mata’u was waiting at the door and I had to peel myself away from the flowers!

Inside, he immediately asked what kind of coffee I liked and got to work brewing my black coffee. He also took out a red cup and said:

“See this? A friend gave it to me and I reserve this for my special guests! Today this is for your coffee.”

I later found out it had the Samoan flag on it. I was honored.

As he made coffee, his partner was also busy chopping up vegetables and preparing some breakfast.

I chatted with Peni and found out he is 66 years old and volunteers his time doing all kinds of handyman jobs for churches and people in the area. Most of the time he doesn’t like to receive payments but people would insist.

“You see John, this is the work of the Man up there. (Peni points up to heaven) See how he connected us together this morning?” 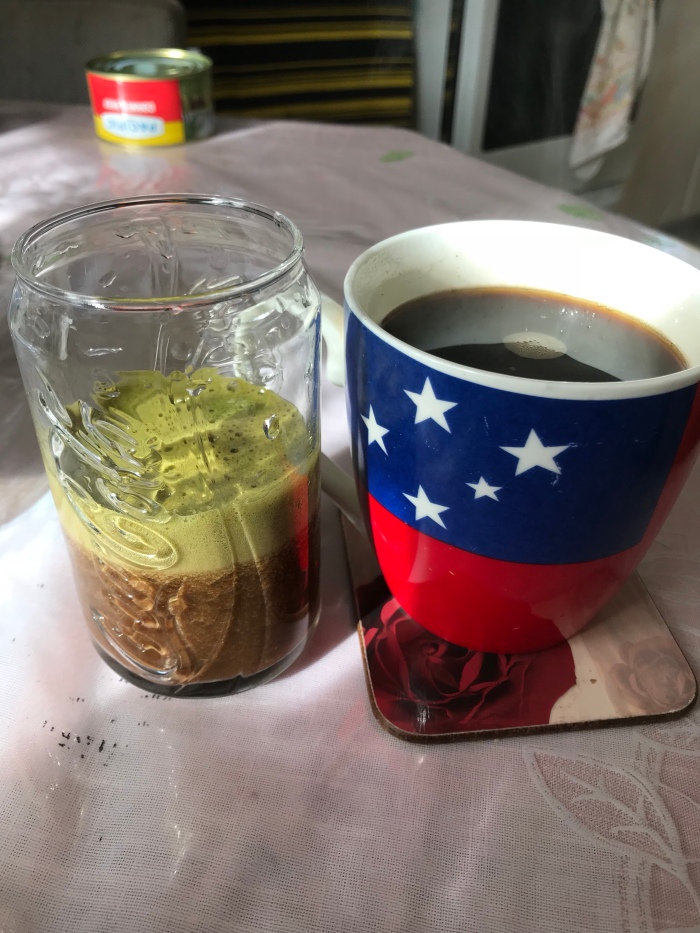 Besides the coffee, Mata’u also offered us a cup of green juice each (he said it wasn’t so green because there was beetroot in it 😄). He himself drank from a big jug. No wonder he still looks way younger than 74 years!

Mata’u then explained how he was the Chairman of the Samoan Health Committee in the church which focuses on delivering health education and information to the community, especially those with ill health. He wanted to invite me to be on the community.

I said I’d be delighted to as I was studying Naturopathy and Herbal Medicine and that prevention and education are two of the principles of Naturopathy.

“Great! You know, I don’t just invite anyone to the committee.”

Again I was humbled and honoured by this Chieftain.

During breakfast he also showed me his new found snack which was basically chilled coconut meat! It was a much healthier alternative to the biscuits we were also offered and thoroughly delicious just eaten as it was! 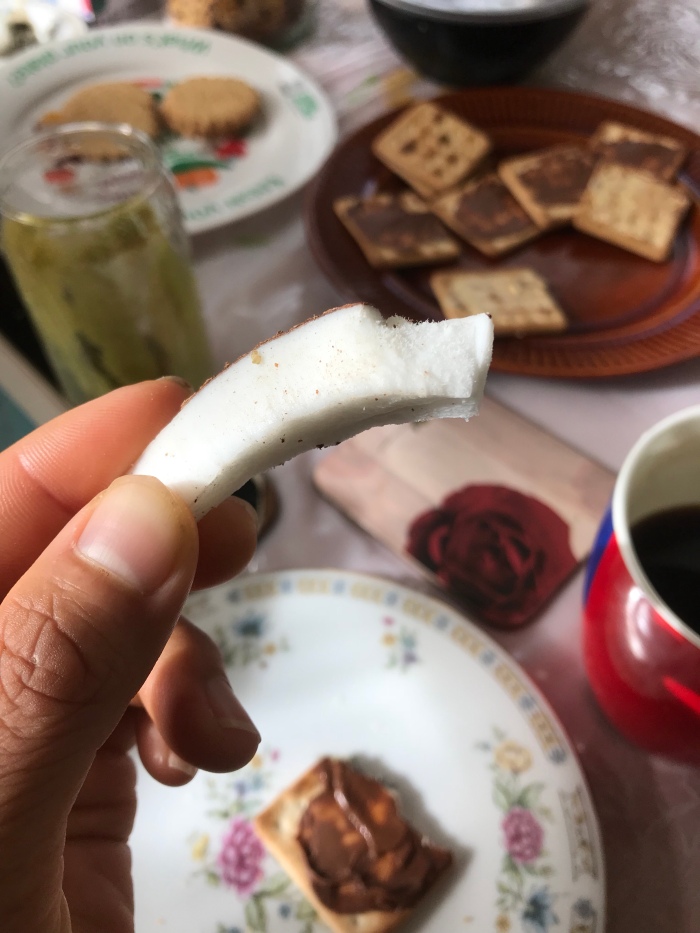 Gesturing to a can of corned beef, he said:

“You know how we islanders love our corned beef?”

He then explained his method of steaming a can of opened corned beef flipped upside down so that all the fats and chemicals/additives would be drained out of the can. The can would also be easily removed after about a minute in the steamer so that the metals from the can wouldn’t leech into the meat too. I thought that was an ingenious idea and commended him for it.

After breakfast he showed me around his living room (“sitting room”) where there were antique pictures of his family from Samoa as well as a couple of pictures with some political figures. It turns out he used to work under the prime minister! He also let me read a few remarkable laminated testimonies from various district judges he had worked under.

To add to my already impressive impression of him, I found out how he had taught himself everything he knew about information technology and using computers and phones. This is rare as I often find most elderly 70-somethings like him don’t have such a growth mindset and usually shun away from new technology.

As I was leaving the place, I noticed his wife watering the plants outside. I took this opportunity to ask for a red rose I had been admiring earlier as I wanted to press it to make a card for my Mother’s birthday. I have had that idea in my head for a while now but have not passed by any really nice roses until today.

To my utmost surprise, after cutting the red rose for me, she offered to cut a white and pink one too! 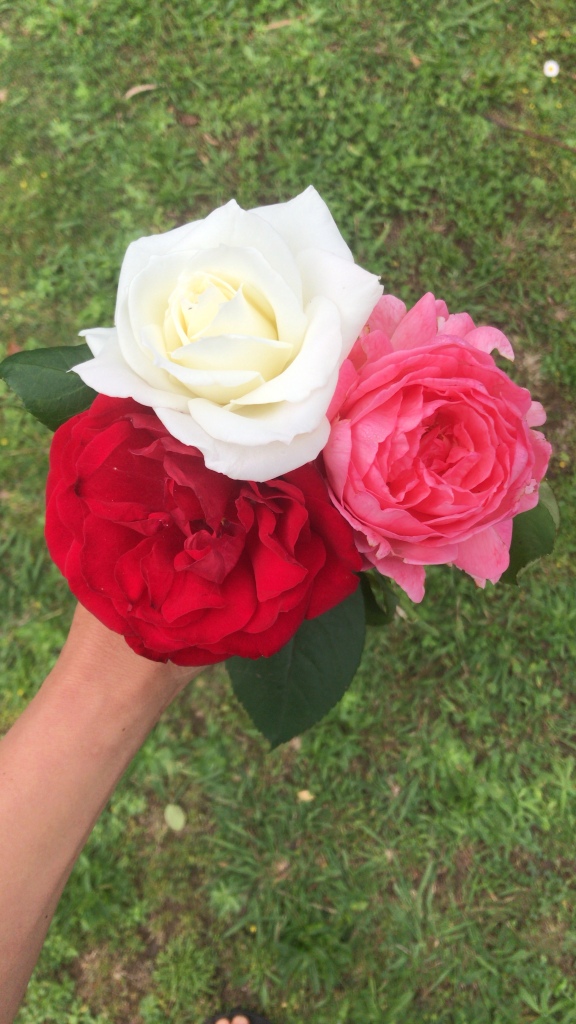 As Peni and Mata’u drove me back home, I could not help but say a short prayer in my heart to give thanks for how the morning had turned out.

I was blessed with meeting a Samoan chieftain, offered to contribute to the Health Committee, potentially found a part-time job assisting Peni and left Mata’u’s place with 3 beautiful roses and some food he insisted I bring home.

Again, this is more evidence that God provides! Often providing more than I needed like the roses and the connections made today.