Last Saturday I attended an introductory workshop to the Wim Hof Method by certified instructor and close family friend of Wim, Nigel Beach.

Ever since I heard about Wim, aka the Ice Man, I’ve been fascinated with him and his “Method” which has seemingly made him Superhuman and he claims to be able to train anyone to do the same superhuman feats he can do.

A short list of some of his Guinness World Records include:

That short list might have already left your mouth open in awe and wonder but here’s one of the introductory videos shown in the session for more inspiration about this amazing man! 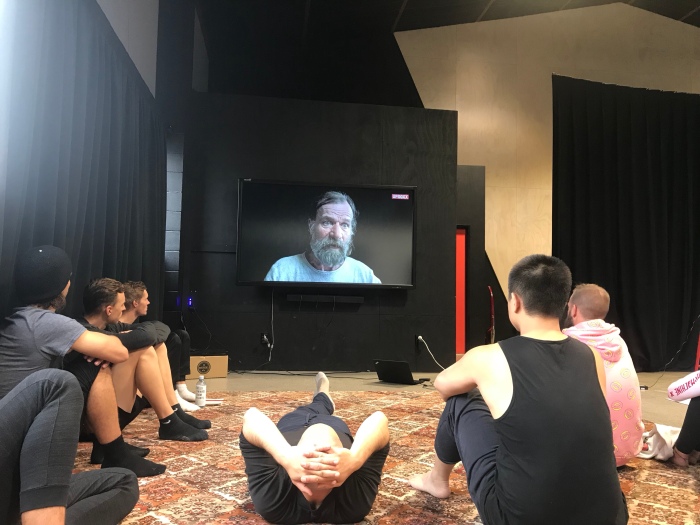 Because of this, Wim has come under intense skepticism and scientific scrutiny and time and time again, he has allowed scientists to measure and test him and proven that he is no gimmick.

One particular study has really interested me as it relates to being able to control our immune system.

“Summary: In this paper, the effects of the Wim Hof Method on the autonomic nervous system and innate immune response are evaluated. A group of twelve people was trained with the Wim Hof Method before undergoing an experiment to induce inflammation, normally resulting in flu-like symptoms. Compared to a control group who were not trained in the Wim Hof Method, the trained participants showed fewer flu-like symptoms, lower levels of proinflammatory mediators, and increased plasma epinephrine levels. In conclusion, the trained group was able to voluntarily activate their sympathetic nervous system.”

So besides being able to withstand the cold, being able to control the inflammatory response of my immune system is the primary reason why I decided to invest the $150 to attend this workshop. 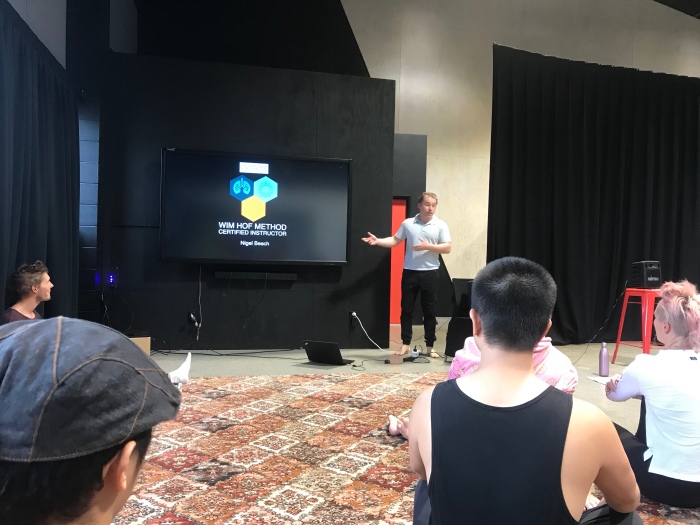 We started with an intro from Nigel about the Wim Hof Method and his personal story of how the method helped reverse all symptoms of his wife’s Endometriosis – a painful disorder in which tissue that normally lines the uterus grows outside the uterus.

Then we watched a cute safety clip to sum up all important safety aspects one should bear in mind when practicing the method. Basically never do it in any situation where potential personal harm is possible.

Well, there have been many reported cases of people practicing the Wim Hof breathing in pools underwater and having shallow water blackouts and almost drowning!

Or doing it in the car and getting into traffic accidents because they got too lightheaded from all the hyperventilation!

“Listen to your body”

“It’s about the effects, not the number of minutes you stay in the cold.”

“Stay focused. Be aware of your own actions.”

I really like how he keeps emphasizing never to force ourselves or our bodies beyond what we are presently comfortable doing. This is an aspect of modern living many of us are lacking as we have become rather distant and unable to listen to our bodies, our hearts and our instincts as well as our ancestors could. 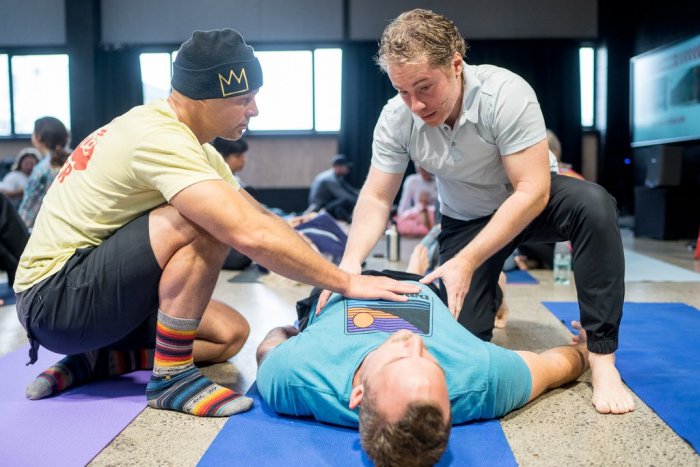 For the next part, Nigel taught us how to breathe properly using our diaphragm. Then we lay down and in pairs, helped each other feel and use our diaphragms to breathe.

This was followed by learning about the Wim Hof breath cycle which we did 4 cycles while lying down and listening to some cool tunes from Wim Hof himself.

While doing this, I felt a tingling sensation in all my fingers and toes, almost as if through the breathwork, I was driving the alkaline oxygenated blood into every inch of my body!

If this is true, it is good news for me because I have always had poor circulation to my extremities – my hands and feet are always cold!

Something amazing happened after the breathing session too. From the picture on the left, you can see how my last three toes are red and swollen. My body has been mounting a painful autoimmune-related inflammatory response for a number of days since eating something wrong ( too many muffins😅).

After those for cycles of breathing and feeling the tingling in my toes, I looked down and immediately whipped my phone out to take the picture on the right! As you can see, it was considerable less red and swollen!

I then proceeded to pinched the joints and they still hurt but not to the same degree they did a couple of hours ago!

Later on, after the 2 minute submersion in 4°C ice water, I would feel almost no more pain! Today, 3 days later, I’m happy to say the effects remain 😄

Back to the workshop.

Nigel then taught us the Wim Hof “Power Breathing” which is basically forced hyperventilation for about a minute or until you get light headed.

We did this followed immediately after with a set of pushups, holding our breaths!

Nigel assured us we would do the most number of pushups (in one breath) ever and I’m proud to say I certainly did!

Finally, it was time for the highlight of the day – the ice bath!

As we stood around waiting for our turns, I admit I was already shivering! The weather that morning was rainy and cold and the breeze from outside wasn’t helping.

Then it was my turn. 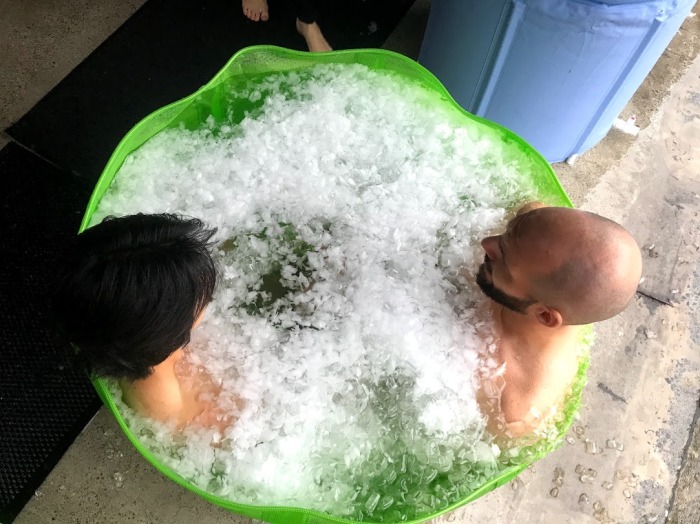 Getting in, I tried to not have any preconceived expectations.

Sure, there was a little fear and anxiety but mostly my mind was a blank and I was focused on staying relaxed.

After 10 seconds, the only thing I could think of was:

Truly, the cold was ‘biting’ at every inch of exposed skin and I felt it especially significantly in my fingers and toes again.

All I could do was close my eyes and follow Nigel’s instructions of breathing in and out from my nose and staying calm and relaxed.

Then the magic happened.

For some strange reason, my body started to heat up!

It felt like an “inner fire” was kindled from deep within my core (or soul) and slowly spread outwards to my extremities.

It felt like my body was reacting to the cold by adapting and maybe shunting warm blood to the surface to form some kind of protective shield or aura around me.

I actually no longer felt cold!

When I head Nigel say that my first thought was:

“That felt a lot shorter than expected!”

In fact, I think I was comfortable enough to stay in there for another minute at least!

Getting out and towelling myself dry, I felt that prickly, biting sensation on my skin again. And every area of skin exposed to the water was red!

A couple of minutes later, I started shivering again… it’s funny how I actually felt warmer inside the water than outside!

Nigel then taught us some Tai Chi horse stance dance-like moves which really helped with the shivering.

When everyone had had their turn, we gathered for a final debriefing and group pic. Nigel gave us all a breathing routine to bring home and practice every morning and together with the cold showers which I have been doing ever since I’ve arrived in New Zealand, this will form the foundation of the Wim Hof Method.

All that is left is persistent practice and patience to let our bodies and mind adapt, grow and change.

As the title of the workshop suggested, this was really an ‘immersion’ experience. Kinda like an introductory workshop or crash course about the Wim Hof Method.

Nigel gave us the skills and laid the foundations we needed to build own practice at home.

The ice bath was unlike anything I’ve ever experienced and feeling the “inner fire” spread throughout my body was really cool. Almost magical and spiritual.

I’m thankful for Gus and Elemetal Health for hosting New Zealand’s inaugural Wim Hof workshop! Do follow their facebook page for upcoming Wim Hof workshops and retreats like the one happening next week in Queenstown!

This next one is 2 days long and will include more things like a movement practice, daily hikes into one of Queenstown’s glacier lakes, a plant-based lunch daily and an additional instructor David Packman from Melbourne, Australia. I’d definitely go for this if I wasn’t on a student budget!

All in, I’m stoked to tick off another thing on my bucket list!

Next on my bucket list would be to meet the ICEMAN in person someday and maybe hike up a snowy mountain with him in our boxers. 🤔

But for now, it’s time to breathe 💨

5 thoughts on “The Wim Hof Method: An Immersion Workshop With Nigel Beach”